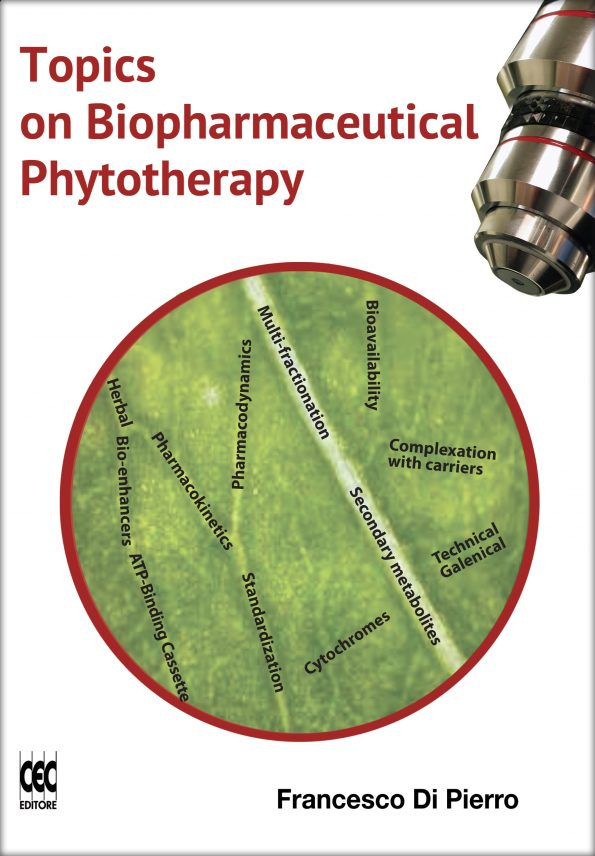 The book, after having shown the molecular basis that, at times, explain the poor pharmacological and clinical behavior of most herbal derivatives, deals with the topics of their standardization and molecular titration. It also deals with the phytocomplex issue, with the problem of the poor oral bioavailability and with the approach of the modern biopharmaceutical phytotherapy finalized to improve the pharmacological and clinical performance of the botanical derivatives by making use of galenical technics, lipidic carriers and enzymatic antagonists.

One chapter of this book, undoubtedly “curious”, is the one dedicated to the chemesthesis that illustrates the possibility of interfering, by means of the herbal derivatives, with the receptors in charge to signal the environmental conditions of “cold” and “hot” and whose use can allow the intervention on pain and irritation mechanisms. Moreover, we are going to deal with two more topics: the French paradox and the phytoestrogens. These are important to understand the epidemiological origin of the use of some herbal drugs, potentially capable of preventing most causes of deaths, cardiovascular diseases and cancers, afflicting, above all, most economically developed countries.

In the following chapters, but in some ways throughout the whole book, we accurately describe some herbal derivatives thought to be important due to their therapeutic applications. These range from urology to metabolic diseases, from lipidology to phlebology, whose investigations exemplify what the correct method should be to understand the herbal drug potentiality and to follow its manufacturing in order to make it a useful drug for therapy.

The book also deals with the problems, unfortunately still widely spread, of herbal frauds trying to highlight, above all, the procedures used to build up a fraud from simply adding a dye, giving the patient the impression that the product contains a highly concentrated extract full of active ingredients, up to the most serious sophistications where the adding of antibiotics or analgesics gives the extract an efficacy which it does not possess at all.

Finally, at the end of the book, we both deal with the difficult chapter of the herbal chemistry, deliberately simplified for an easy reading and understanding, and with the chapter concerning with the natural sweeteners obtained by extraction, a possible alternative proposal to the endless controversial matter of artificial sweeteners.

On the whole, the book speaks about a phytotherapy which wants to be and should be considered a scientific matter. A phytotherapy which, on the one hand, wants to be aloof from the modern herbalist’s shop and, on the other hand, a tool meant to be useful for the medical practice, in order to add, but not replace, to the already existing allopathic instruments, so as to lengthen and enrich, in some way, the list of the medical means available for the patient.