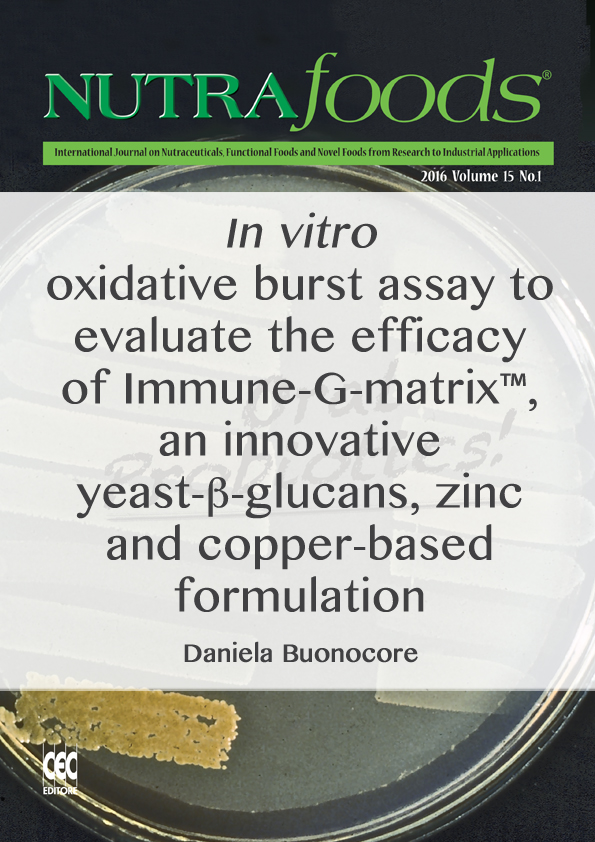 In vitro oxidative burst assay to evaluate the efficacy of Immune-G-matrix™, an innovative yeast-b-glucans, zinc and copper-based formulation

Oxygen is necessary for the survival of aerobic organisms, while at the same time it is able to acquire electrons generating toxic molecules called reactive oxygen species (ROS) (e.g. superoxide anion, hydrogen peroxide). ROS can generate reactive oxygen metabolites, causing oxidative damage to biological macromolecules. On the other hand, in the higher organisms the immune system uses ROS against pathogens. Infections or other stimuli can induce cell activation (e.g. neutrophil cells) and functional responses, such as the oxidative or respiratory burst and later ROS release. Subjects with deficits in intracellular defence mechanisms have an increased susceptibility to infections by microorganisms. The aim of the present study was to evaluate in vitro the capacity of an innovative yeast-β-glucans, zinc (Zn) and copper (Cu) formulation, Immuno-GMatrix™, based on G-MatrixLipid™ technology, to induce oxidative burst in neutrophil cells in comparison with an activator, phorbol 12-myristate 13-acetate (PMA). Oxidative burst evaluation was based on the capacity of released ROS to change the fluorescent properties of a substrate, dihydrorhodamine 123 (DHR). We measured the intensity of fluorescence compared with a negative control sample (differentiated cells) and a positive control sample (cells incubated with PMA). The results showed that Immuno-G-Matrix™ was able to induce functional responses, such as the neutrophil oxidative burst, as is the activating agent PMA.

In vitro oxidative burst assay to evaluate the efficacy of Immune-G-matrix™, an innovative yeast-b-glucans, zinc and copper-based formulation