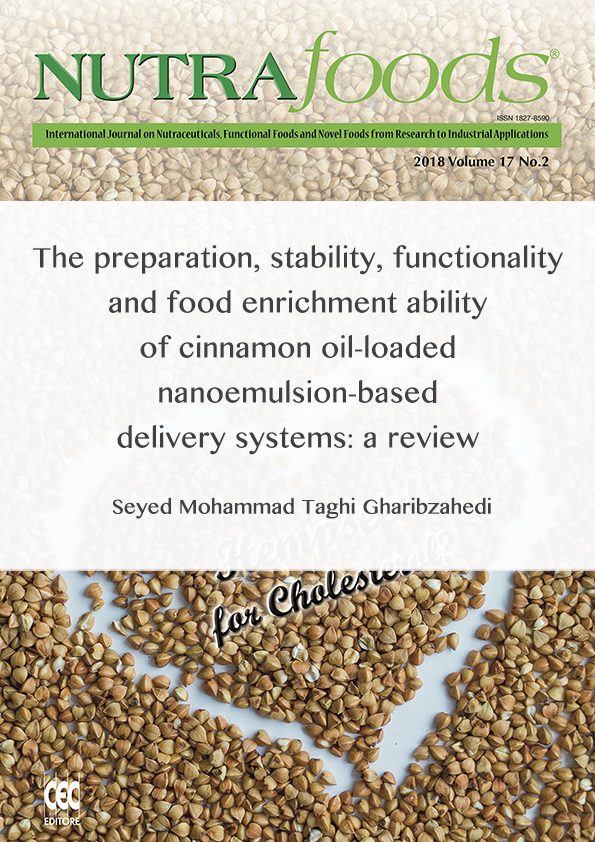 Even though cinnamon oil (CO) has functional and health effects in humans because of the presence of the antioxidant cinnamaldehyde (CIA), its food applications have been limited due to its poor water solubility. Encapsulation of CO in stable nanodroplets is a unique strategy to enhance the stability and bioavailability of hydrophobic molecules in the CO structure. A literature review has been conducted on the formation of stable nanoscale droplets using low- and high-energy nanoemulsification methods, physicochemical and antimicrobial characterization, and the food application efficiency of CO micro/nanoemulsions. Although high-energy emulsification technologies are more commonly used to produce CO nanoemulsions, there is considerable interest in the fabrication of these delivery systems using the low-energy techniques of spontaneous emulsification and phase-inversion temperature. Processing and formulation (oil phase composition and surfactant content) variables were optimized to produce the smallest droplet size and slowest CIA release rate. Cinnamon and CIA nanoemulsions can effectively control pathogens in functional foods during processing and storage. A strong inhibitory effect on many microorganisms can also be exerted by small nanodroplets encapsulating these bioactive compounds into edible films to significantly decrease the synthetic preservative content. The antibacterial and antifungal activity, nutritional value and physicochemical quality of foods can be improved by adding CO-enriched nanoemulsions.